LinkedIn Is Encouraging Some “Following”

LinkedIn has long been viewed as the bastion of business social networking because it easily provides professionals with “connections” to their co-workers and others in their particular field. Now, the site is experimenting with its profiles, turning the focus from “connections” to “followers”. 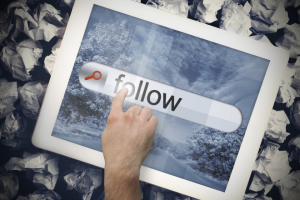 LinkedIn’s “follow” button that was quietly rolled out last year allows users to engage in asymmetrical relationships with each other. This button opened the site up to being not only a way for people of mutual interest to bond, but also as a means for seasoned professionals to accrue a high number of followers (think Twitter). However, the “connect” option was in no way deleted, but rather the “follow” option was subtlety added.

Recently, LinkedIn gave a select number of profiles a minor makeover, switching the connect button for a “follow” button. LinkedIn’s Next Wave List (a list featuring 150 up-and-coming business leaders under the age of 35) joins the other roughly 500 heavy-weights dubbed LinkedIn “Influencers” in having “follow” as the main option on their profile, and “connect” as a more hidden action.

So, why are these LinkedIn members suddenly having their follow button promoted? Simple: if you find someone interesting, but don’t personally have a “connection” with them, LinkedIn wants you to still be able to to receive updates from them. Additionally, this spares some of the big names on the network from being inundated with requests from people they would perceive as total strangers.

While the follow button itself is not new, LinkedIn’s subtle change indicates that the network is not at all stagnating in their innovation. It does not mark a drastic change in the social network’s mission—users are still encouraged to connect with each other. However, it would seem that LinkedIn is taking a closer look at their algorithm, and progressing away from the Facebook-like two-way connection model, to a more Twitter-like system of “asymmetric connections”.

Now, the main question: why is this pertinent to you? For one, LinkedIn may very well compile another list akin to this one in the future, and any business should strive to be eligible for such a list. But even more likely, LinkedIn seems to be experimenting in how to encourage more and different types of engagement on their network. These Next Wave Personalities might be more than interesting characters — they could very well provide you with new ways to interact on LinkedIn.