HBO teams up with Snapchat to promote Game of Thrones prequel

After House of the Dragon came thundering out of the gates its opening weekend, we have every reason to believe it will be just as popular as the original Game of Thrones series. With almost 10 million accounts tuning in, the streaming premiere shattered records for HBO’s largest recorded audience for a new original series premiere.

In its latest promotional stunt, HBO Max has teamed up with Snapchat to create a series of unique lenses featuring different dragons from the show.

So far, the collaboration features a selfie lens that turns you into a fire-breathing dragon, a worldview lens that “leverages sky segmentation technology” to display dragons circling overhead, and multiple Landmarker lenses with different dragons that are only accessible at certain geographic locations.

To create the specialized Landmarker lenses, Snapchat enlisted Lens designers across the globe for assistance and allowed them to personally select the access locations for their lenses.

Six of these lenses were released in Los Angeles, Rio De Janeiro, London, Chennai, Mumbai, and Prague in conjunction with the series premiere on Sunday, and at least 14 more lenses will be released periodically as the series continues. These lenses will feature new dragons as they are introduced in the show, and are set to release alongside pivotal mid-season episodes and the season finale.

You can try the new lenses for yourself by scanning the Snap code below. 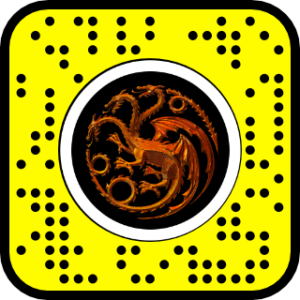 If you’re craving more immersive House of the Dragon experiences, you’re in luck: HBO also developed a companion app called DracARys, where users can “raise their own virtual dragon.”