As healthy eating habits grow increasingly popular, new food brands prioritizing lower sugar counts and alternative ingredients are taking center stage in the market. One of these rising stars is cereal brand Surreal, which posits itself as a plant-based, high-protein, low-sugar alternative to the likes of the over-processed Trix and Coco Puffs so many of us grew up with.

In a fresh out-of-home campaign, the brand pokes fun at its sugary rivals in a series of clever billboards featuring message like “Snap, Crackle and Jacked,” “Coco’s got competition,” and “It’s special, K?”. One design with the text: “Don’t tell Tony,” is scratched with tiger claw marks suggestive of an angry Frosted Flakes tiger mascot. 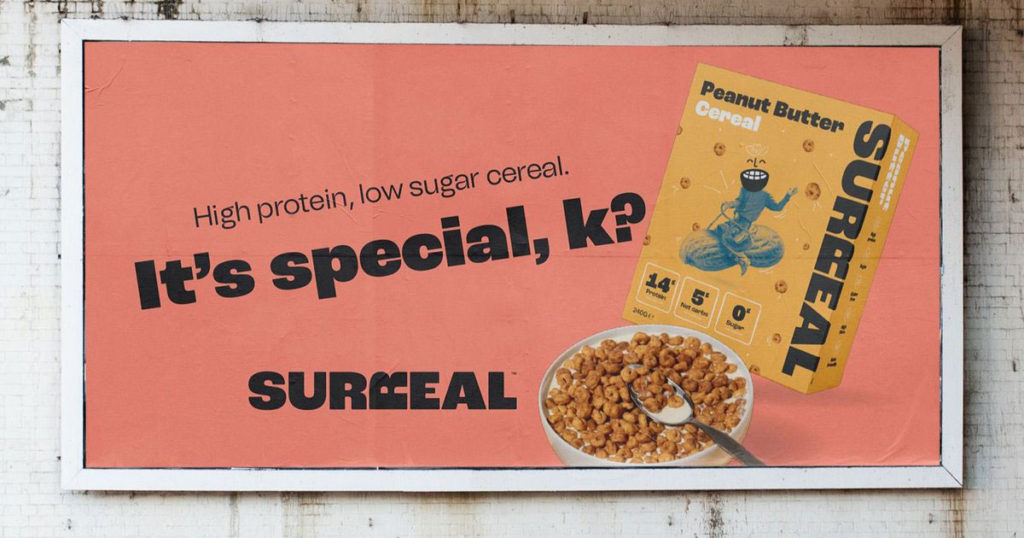 Surreal partnered with UK agency Onwards and out-of-home company Clear Channel to create and execute the creative campaign, which will run at over 180 billboard sites in select areas across England from July 18 to August 15.

“We don’t want Tony finding out that it IS possible to make cereal that’s both tasty and healthy. We’re asking the public not to tell Tony about our high-protein, zero-sugar recipes – he’ll only get grrrrrrrumpy.”

Started by Jac Chetland and Kit Gammell, Surreal just launched this year. According to its website, the brand aims to produce cereal that is “healthy AND taste[s] like it did back in the good ol’ days.”

In the UK, the time is ripe for the introduction of a brand like Surreal, as the government cracks down with new regulations on sugary foods. According to Adweek, the UK government plans to roll out legislation in 2024 that will prohibit the marketing of food and drink classified as high in sugar, fat, and salt (HFSS) on digital and TV channels before 9pm.