Where did Fortnite go???

How do you boost your popularity when you are already one of the most popular games on the planet? Simple. Make yourself unavailable for a weekend to create some major withdrawals and generate serious hype for your return.

At least, that’s what Fortnite decided to do this past weekend. Around 2 o’clock ET on Sunday, a meteorite crashed into the Fortnite-verse, and “set off a cataclysmic chain reaction that sucked up everything on the island and eventually wiped out the entire map,” according to Variety. The publisher Epic Games had previously announced that an event called “the End” was coming, but gamers had no idea that this is what the company had in mind. The social media response was explosive.

Fans were quite literally, left in the dark. Fortnite’s official Twitter account offered no elucidation on the matter, simply pinning a tweet with a live video feed of a black hole, to the tune of spacey sounds. All previous posts were deleted, and their profile image was a void of blackness. 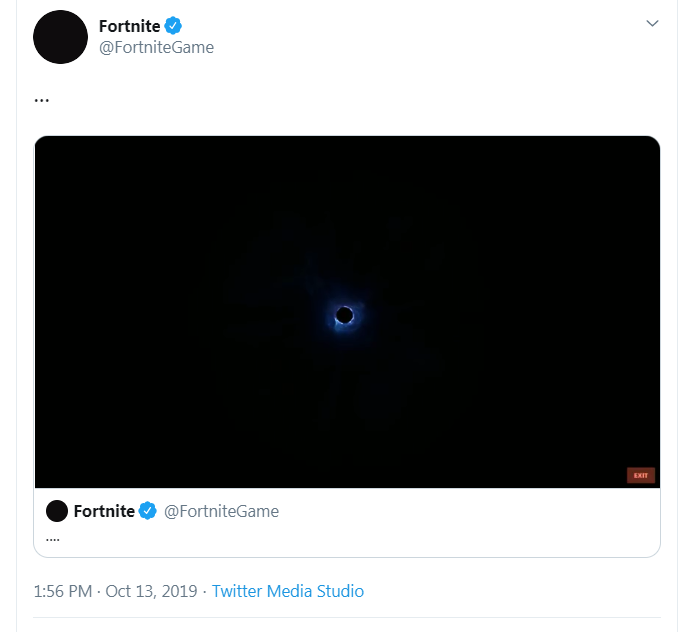 At the time of the blackout, Variety reported:

The “Fortnite” website also shows nothing but a live Twitch feed of the swirling black hole (with more than 57,000 viewers watching it on Monday morning as of around 9:30 a.m. ET). The game’s Instagram account posted blank black images and video of the black hole following Sunday’s event (although prior posts were not deleted).

Early Tuesday morning, users reported that Fortnite’s servers went offline for a couple of hours, and then came back with a trailer and the start of another season now available – Chapter 2.

According to Epic Games’ estimates, Fortnite has a total of 250 million registered users as of this spring. Kudos to Epic Games for their first-rate disappearing act – and brilliant marketing stunt.