Say goodbye to chaotic and nonsensical group texts! At the Worldwide Developers Conference, Apple revealed some exciting news about iOS 14 ­– it will now allow inline replies (also known as threads) in Messages. 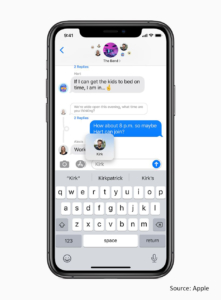 While some apps, such as Slack, have allowed for threading, it has not been possible in iMessage – until now. Users will now be able to respond individually to past messages, helping in those situations where multiple conversations are going on at the same time.

iOS 14 gives you new ways to stay connected to the conversations that matter most, keep track of group conversations, and express yourself however you like.

Now you can reply directly to a specific message in a group conversation. You can view replies in the full conversation or as their own thread for a more focused view.

The update will also enable you to tag a person by name if you want to get their attention, another tool to bring order to the chaos of group chats.

The new iOS will also allow you to set alternate browsers and mail apps as your default, rather than Safari and the mail app, a plus for fans of Google products.

More interesting is the update to the home screen. A feature that has remained relatively unchanged throughout the iPhone’s history, the home screen is now getting a glow-up. Similar to Android, Apple will now incorporate widgets, which can be resized, making it easier to access your favorite features. You can even use “Smart Stacks” of widgets that appear at the times of day that you use them.

These are just a few of the upcoming changes – which are you most excited about?