Are You Aware of These New LinkedIn Updates?

Unlike Snapchat or Facebook, which seem to get updates on the daily, LinkedIn tends to take updates at a slower pace. However, the platform has been stepping up their game:

Recently, LinkedIn released multiple new features for the app version, all of which have enhanced the overall experience.

LinkedIn’s Official Blog posted about the update in late July:

Want to share photos from an industry event you attended? Or how about photos from your team offsite that capture your company culture? You can now select multiple photos to include in a single post on LinkedIn. With this new feature, you can share more than one view of the experience you want to share with your network. They say a picture is worth a thousand words, now imagine what multiple pictures will do. 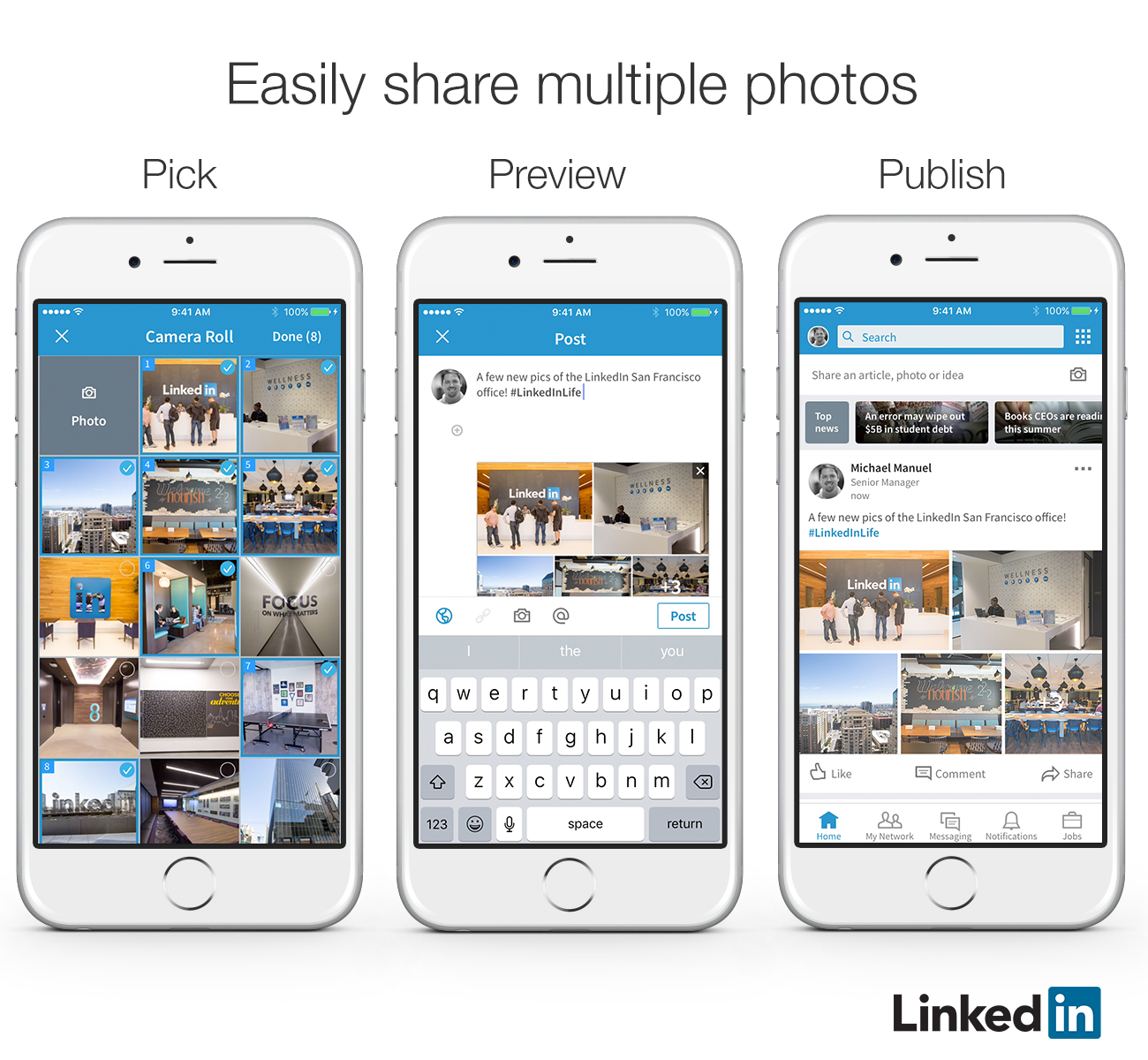 Earlier in July, LinkedIn realized a long-awaited feature, which allows some users to upload their own video content as opposed to sharing what is already on the platform or the web. However, the video-sharing process is somewhat different from other apps, such as Instagram and Facebook. Marketing Land explains:

In bringing the video-sharing option to its main app, LinkedIn will add a video camera icon next to the normal camera icon in the app’s status update box. People can click the new icon to record a video using LinkedIn’s in-app camera or upload clips saved to their phone’s camera roll.

LinkedIn’s video-sharing option appears to be pretty standard. But like most things with LinkedIn, it has a unique business twist.

Videos can run up to 10 minutes long, according to the LinkedIn spokesperson. A best practices guide shared by the spokesperson recommends that videos range between 30 seconds and five minutes in length. The guide also mentions that videos can be horizontal or vertical. And as on Facebook, YouTube, Instagram and Twitter, people will be able to see how many views, likes and shares a video of theirs received; like Facebook, LinkedIn counts a view once a video has played for at least three seconds.

Now for the twist. LinkedIn will give people information about their viewers like the companies where they work and their job titles. LinkedIn will not share a complete list of all viewers’ employer names and job titles, but a selection of the top ones, according to the spokesperson. That information might not mean much to a YouTube creator or someone filming their five-year-old on Facebook, but it’s a significant carrot for the business crowd LinkedIn caters to, particularly if it turns out that LinkedIn users like watching videos as much as users of seemingly every other social network.

Unlike days of old, you no longer need to be logged-in to view your LinkedIn content. In other words, even if you do not have a LinkedIn account, you will be able to view things people share with you from the platform.

According to Social Media Today, you now have the ability to let others edit your post before you publish it.

If you’re writing for your company page, this makes editing a lot easier for your content team — it’ll be very similar to the drafts we see on Medium currently.

Last but not least, the days of worrying about LinkedIn comments are long gone. You now have the ability to either disable comments on any long-form article you post, as in the example below: However, this option is presently only available for long-form content. However, Linked has provided a ‘Report’ option, which allows users to report and potentially remove specific comments below any other type of post: Although some of these updates are newer than others, we are glad to see LinkedIn investing in making their app more user-friendly app. Which of these new updates have you used so far?